espn.com says gb will be one of the teams

3. Packers
Brett Favre will be back next season and so will playoff football in Green Bay. (Jeff Hanisch/US Presswire)

their shhould be a picture of brett favre under voices.
P

Good. thats what i wanted for the pack. I hope Favre sees that! 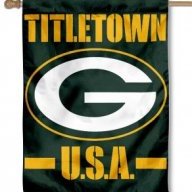 Is there a link to the actual site where it shows this? I can't seem to find it on the nfl espn's website.
P

Is there a link to the actual site where it shows this? I can't seem to find it on the nfl espn's website.
Click to expand...

All it was, was a picture show of five teams or something like that with a description below stating why they would be in the playoffs.

It's gone now, atleast to my limited vision.
U

yea, it is gone their was a pic with a caption and their was no link to it. but i did copy what it said.
S

Kind of a no-brainer, though. We're young and improving, in great shape cap-wise, and we almost made it this year (despite being thought of as one of the worst teams in football just two months ago).

If Brett comes back, I'd say we're a lock for the playoffs.
D

Yes, if Favre comes back, we will be at least a 10 win team, whcih makes you a playoff team. We could even win the NFC North, since the Bears are gonna lose a good portion of their starters, and depending on what TT does during this offseason, we could even win 12 games, and get a first round bye.
U

theirs no doubt that we will be a 10 win team if brett comes back, if you think about it we could have been a 10 win team this season.
J

With Favre at the helm, definate playoff team.

Sorry to throw "some" water on your building playoff fire, but seriously folks...

1)Strength of schedule. This year the Packers won four of their eight games against Detroit and Minnesota. Yes they won, but....they also beat Arizona, Miami and the 49'ers...hardly teams knocking on the playoff door. The win over the Bears was significant, but did Chicago go all out?
Keep in mind the early loss to the Bears, the Jets, and New England. The Packers weren't even factors in those games...and maybe the Philadelphia loss as well. They could/should have won the St. Louis and Buffalo games but didn't.
Next year the Eagles, Panthers and Chargers come to Green Bay and away they play the Giants, Cowboys, Rams, Broncos and Chiefs.
If the team finishes 8-8 next year I would consider that a step forward than beating the Cards, Dolphins and 49'ers.

2)Everyone is assuming Favre comes back. I don't. I think he's done. I think he wanted to do one more year so his final year wasn't the el stinko 2005 campaign. The change at QB could be significant for the offense. Aaron Rodgers is hardly battle experienced.

3)A. Green is a free agent. While he's likely to come back, if he leaves do we have a runner capable of carrying the load? Morency? Really?

4)I think the defense will be better. They will have to be because the competition is better.

5)Changes in the coaching staff. Jagozlkxjxklxski's loss could be significant in that he seemed to be the person to implement the zone system. No one knows the system as well as he did. A new coordinator also will want to put his stamp on it, though McCarthy has the final say.

So the simple "they're heading to the playoffs next year" is assuming much, in my opinion. But there is reason to think the team will improve. But, don't be surprised if they tread water one more season.
U

we are assumeing that tt will give favre some more weapons to work with and the d played great at the end of the season.

next season we should have a good kick returner(k rob) and favre will have more people to throw the ball to.

i dont see why you dont agree with the fact that we will have a 10 or more win team.
C