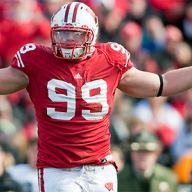 I take offense to that sir.

Krabs said:
Some things to think about. Tennessee has given up the 7th fewest points in the league this season. In the same respect, they are ranked 24th in TD passes given up with 16 on the season. They've actually given up the 4th most with statistical ties. The interesting thing is that they have given up only two rushing TDs all season. That's ranked #1 if anyone is curious. Yards is similar. They have given up the 2nd least all year. A far cry from when Dillion sliced and diced them a couple years ago. They can get after the QB as well. They have 29 sacks on the season. That's tied for 4th in the league. Statistically speaking, we will have to make our money through the passing game. I don't like our chances with that.

As I read above, Tennessee's offense is pretty bad this season. They're in the bottom 10, if not worse, in most of the significant statistical categories. They're dead last in total yards. The Packers rank top 5 against the pass in terms of yardage, but bottom 5 against the run. If I'm the Titans I run down hill all day with Henry.

It's a short week with the Packers getting to play at home. The weather is supposed to be ridiculously cold. I feel like those factors do play into their favor a bit. Don't mean to be a downer, but I think the Packers come up short again. Too much defense from Tennessee and too much Henry. 24-13 Titans.
Click to expand...

Seems the stats told a story here. This team is just not that good. I said a couple weeks back that they win 4 more games and one will be by accident. That was the Cowboys game. They already lost the Lions game, so I'm saying two more wins tops.

Best and Worst of Final Preseason Game vs Chiefs
2