Walker injury is reported as minor

Wide receiver Javon Walker survived his first day of two-a-days but Saturday morning he strained his back and sat out the afternoon session.

Walker was on the sidelines watching Packers training camp but he did catch some balls from the ***** machine.

The Pro Bowl wide out says he's in good shape even though he skipped both minicamps this off-season. He believes he can be back on the field Sunday morning.

"I hope it gets better. I mean, I know it's nothing serious because it's just tight," Walker said.

He dismissed speculation the injury was because he missed the minicamps. "That's not it. We were in pads, and it just happened. I mean, we were in pads this morning." 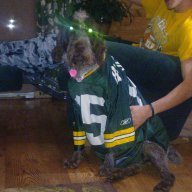 I hope this isn't a ploy by Walker to collect his pay but not play. :evil:
A

I dont think he is. After spending time at the practice I can see anyhow it looks like at least that he is not going to be a problem.
T

He doesn't get paid until after week 1 of the season.
A

Good point, and also I believe him in his interview which is on packers.com when he says that he came back to play because of his desire to play football. I dont think Javon hates the pack or the fans or anything, because remember he was supposed to go to Miller Park for Javon Walker night or somthing and right before he was supposed to go he announced that he was holding out, but he still went. I think he is still happy to be in green and gold.

5 Players That IF They Fall...Gute Would "Have" To Pick