What did Michael Vick have in his bottle?

Vick was going through a screening point to board an AirTran flight when officials said he was reluctant to give up his bottle of water. Airport officials said the bottle's label concealed a seam, which separated the top and bottom of the bottle. Both ends were sealed by clear partitions and what appeared to be a silicone sealant.

When held upright, the bottle appeared to be half full of water, according to TSA officials. Vick has not been arrested and the substance found inside the bottle is being analyzed at a Miami-Dade Police Department lab.
C

[align=center]
You must be logged in to see this image or video!
[/align]

Note in police report that the whole incident is on surveillence video.

The reason, police say: The plastic bottle had a secret compartment that, when opened, had a dark residue and a pungent odor of marijuana.

Vick boarded his 8:20 a.m. AirTran flight to Atlanta before screeners called police. Now Miami-Dade police are examining the bottle and could charge him if it tests positive for drugs.

According to a Miami-Dade police report, here's what happened:

Vick, 26, balked when security at the Concourse G checkpoint asked him to surrender his water bottle, which had an Aquafina label. Security regulations prohibit travelers from carrying bottles with more than 3 ounces of liquid through checkpoints.

Eventually, Vick left the bottle behind and went to his gate. But his initial reluctance to do so aroused the suspicion of Transportation Security Administration screener Gertrude Joseph. She pulled the bottle out of a recycle bin and notified her supervisor when she discovered its hidden compartment.

Screeners told police they recognized Vick as the pro football player, and they were certain it was his water bottle because they saw him throw it away and it was the only water bottle in the recycle bin.

Miami-Dade police reviewed surveillance video from the checkpoint and said it corroborated the screeners' version of events. They also confirmed Vick was a passenger on AirTran Flight 338 from Miami to Atlanta.

The bottle had a clear partition in the middle, separating the bottle into two compartments.

Vick, the top NFL draft pick in 2001, is the older brother of Miami Dolphins wide receiver Marcus Vick and second cousin of Oakland Raiders quarterback Aaron Brooks. Vick is known around the NFL for his ability to scramble away from defenders and make dazzling running plays. He is third on the NFL's all-time rushing list for quarterbacks, running for more than 1,000 yards this past season.

Vick is two years into a 10-year, $130 million contract with the Falcons.

What an idiot!! In this era when shampoo, and razors are not pemitted and you have to get go in stocking feet and have your shoes examined; he is taking marijuana. Marijuana that can get him a 4 game suspension costing him over 3 million dollars.

A little bit of marijuana that can cost him so much being transported through the airport with a high risk of being caught and arrested is a sign of chemical dependency. Drugs are more important to him than his freedom, his employment, his reputation and anything else.

This guy needs an intervention.

Great news for the Falcons, maybe if they are lucky Vick won't be able to play this next season.
D

Vick is a turd...always has been...always willing to throw teammates and coaches under the bus to cover his own shortcomings.

Between him and Marcus...well, that is a gene pool that is better left dry!
C

Geez.......like he couldn't afford to buy his drugs when he got to his destination!!!

Geez.......like he couldn't afford to buy his drugs when he got to his destination!!!
Click to expand...

Miami has better stuff then Atlanta I guess :shrug:

How stupid is he if this is really true?

His FULL name is "Ron (i buy my pot straight from) Mexico!"
C


Pull up a chair and wait. The trainwreck is going to happen.
A

must've been hash oil, that stuff is fantastic...i've heard.
C

must've been hash oil, that stuff is fantastic...i've heard.
Click to expand...

lol..is there any other way to serve corned beef?
P

Bet Jim Mora is glad he won't be there next season...

they are calling this 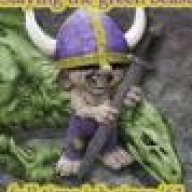 they are calling this

You've been hangin with Cheesey too much LT ! :razz:

longtimefan said:
they are calling this

You've been hangin with Cheesey too much LT ! :razz:
Click to expand...

Saw a story on it on Atlantas Fox station online..that is what they called it..They spent like 10 mins on the whole thing..
T

Maybe it was a bottle of completions....
C

Maybe it was a bottle of completions....
Click to expand...

This guy is beyond stupid! He can't do without his stimulation during a three hour or less flight? I forget what his wonderlic score was but it could have been a MINUS (-). If it wasn't, he got help. Guys like this never change because they don't understand or have common sense. I hope he gets cut...I wouldn't have him on any team I owned. Addition by sutraction.
P

Turns out there wasn't anything in his bottle but water...

If it was for jewelry(it wasn't) then it can only be to avoid payment of customs fees when returning to the U.S. with jewelry purchased outside the country. Not particularly safe when traveling as a water bottle would readily be disposed by anyone cleaning.

Why did stupid Vick say anything like that on the day Schaub is traded?

Does anyone think Vick will finish his contract?

ESPN.com reports the Miami-Dade Police Department has disagreed with Atlanta Falcons QB Michael Vick's description of an incident in January where his water bottle was seized at Miami International Airport.

Vick claims the water bottle was a jewelry box, but police claimed the bottle smelled of marijuana and had a secret compartment. "If you had seen the bottle, you would have never known there was any jewelry in there.

I have had things stolen out of hotels. But I had never checked it through the airport," Vick said. Detective Nelda Fonticella, a spokeswoman for the Miami-Dade Police Department, told the Atlanta-Journal Constitution that was the first time they had heard that story when asked if Vick was carrying jewelry in the bottle.

"If he has any kind of problem with the way things were handled, then he needs to talk to internal affairs," Fonticella added. There are no documents related to the incident that mention jewelry, including the police report and the Florida state attorney's case memo, according to the newspaper.

What I think our defense should do in the playoffs.

The Packers Have Now Won 11 Straight, Defense Controls Second Half Against Atlanta

Packers' Matthews has football in his blood