Orton, here's a who.

The quarterback the Packers will be facing in Buffalo this Sunday is an old familiar name, about whom there are some unpleasant memories from the past. Kyle Orton is a 9 year National Football League veteran journeyman back-up and placeholder, who has been part of some notable stings against the Packers in the past. He has an all-time 4-2 career record against Green Bay and is undefeated against the Packers when he's the quarterback with the home field advantage.

Orton came into the league in the same draft class as Aaron Rodgers in 2005. He was a fourth round pick of the Chicago Bears out of Purdue. Orton had been a solid college quarterback. He led the Boilermakers to four straight bowl appearances; something such famous predecessors as Bob Griese, Mike Phipps, Mark Herrmann and Drew Brees were never able to do. In Chicago he was projected to be the back-up to Rex Grossman.

While Aaron Rodgers sat on the Green Bay bench his first 3 years Orton was thrust into immediate starting duty as the result of Grossman's chronic injuries. He started 15 games as a rookie in 2005 and won ten, helping the Bears supplant the Packers as NFC North champions. Orton's 10 wins is the fifth most for a first year qb in NFL history, behind Ben Rothlisberger, Matt Ryan, Joe Flacco and Russell Wilson.

Orton was seldom a spectacular quarterback but the Chicago situation suited him well; with a great defense, strong rushing game and outstanding special teams to support him. Orton may not have carried the team but he didn't hurt it with bad mistakes, either. Still, the Bears were committed to Grossman as the starter but Orton continued to get extensive duty due to Grossman's tendency to be injured a lot. By 2008 coach Lovie Smith was ready to name Orton his starter but general manager Jerry Angelos had other ideas. He traded Orton, two first round draft picks and a third to Denver for Jay Cutler.

Orton got off to a strong beginning as the starter in Denver. The Broncos started 6-0 with him and rookie head coach Josh McDaniels before the mirage faded and the team wound up only 8-8. But Orton did throw for over 3,800 yds and 21 td's that season, with 12 INT'. In 2010 Orton threw for 3,653 yds., 20 td's and only 9 INT's; but the Broncos had a losing season. Then Tim Tebow-mania began to take over.

Orton began the 2011 season as the starter. In an early season game against the defending Super Bowl Champion Packers at Lambeau Field he completed 22 of 32 passes for 273 yds. 3 td's, 3 INT's in the Broncos' 49-23 loss. But a few weeks later he was traded to Kansas City as the Broncos decided to go with Tebow and was again put into the starter's position when Matt Cassel got hurt.

As a result Orton would face the dynamic Packers for a second time that season. The Pack came into Arrowhead Stadium heading for what looked like the NFL's third undefeated regular season in history. They were 13-0, on a 19 game winning streak. But with Orton outperforming league MVP Aaron Rodgers by completing 23 of 31 passes for 299 yds the Chiefs upset the Packers 19-14. And perhaps showed the rest of the league how to beat the Packers, as they would be a "one and done" in the playoffs despite a 15-1 record.

Orton has been a career back-up to Rex Grossman in Chicago, Matt Cassel in KC, Tony Romo in Dallas and a placeholder for Tim Tebow in Denver and now E.J. Manuel in Buffalo. One has to wonder if he couldn't have been much better for himself and his teams if any club would have committed to him as their starter. While he's no Tom Brady, Matt Ryan or Drew Brees has had done well in the right situations with a defense and rushing game to support him.

There's probably a few Bears fans who think they should have kept him rather than trade for Cutler and used those prime draft picks to keep their defense intact. Orton did produce a 21-12 record as the starter in Chicago. 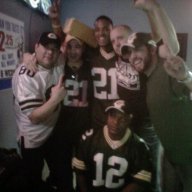 Yea not to many guys have a winning record against the Packers but he does. Hopefully we can put pressure on him and force him to throw a few picks. Can't let them run the ball and control the clock because they can play defense .

Yep...like I said... if we don't play decent Kyle Orton is very capable of beating us.

Several have mentioned Matt Stafford over the past few weeks. Fact is, Orton is every bit (or more) capable of beating the Pack. He's got a better QB rating and completion %.

I'm just hoping we can break this down to a Rodgers verses Orton contest. In that scenario, Rodgers on an average day wins that. 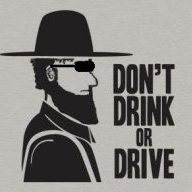 You got to be his cousin or something. How many people, let alone a Packer fan, is going to know that much about Orton? Or spend that much time researching him?

This is an interesting FACT: the Packers are 0-5 in Buffalo all time. Aaron Rodgers has never started a game there however .
D

Definitely going to be an interesting game. Orton is not a bad QB and the Bills aren't a bad football team. They are capable of winning big games (see Detroit game earlier this year and it was on the road)

I'm predicting a GB win, but I won't be surprised if they make some plays. The Bills will be coming to play. They want a wild card spot. However, we want home field advantage and a 1st round bye.
S

Capers will need to blitz often. Orton isn't real mobile and can throw picks if the heat is on. The 4 man rush is not working for the Packers and if Capers decides to only rush 3-4 Orton will have a big day again like he did in KC.

That's quite an article on Orton.. I think the Packers win it though even if Lacy can't play.. Pack 27 Bills 20

"He traded Orton, two first round draft picks and a third to Denver for Jay Cutler."

In hindsight, this was a dumb move.
S

Packerlover said:
"He traded Orton, two first round draft picks and a third to Denver for Jay Cutler."

In hindsight, this was a dumb move.
Click to expand...

Lucky for the Packers that the Bears pulled such a dumb trade. Reminds me of Dan Devine's trade for Hadle 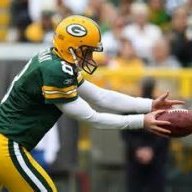 ive always liked orton and agree he should have been a starter in more teams and chicago had a good thing with him under centre, guess they wanted more razzle dazzle rather than more wins and less interceptions, as he reminds me of alex smith, a game manager, who with a great running attack can move an offence safely and soundly.
OP
OP
P

Orton is also holding down the starting job in Buffalo that Matt Flynn couldn't nail down last year and got cut. Luckily, as it turned out, for the Packers.

Sanguine camper said:
Capers will need to blitz often. Orton isn't real mobile and can throw picks if the heat is on. The 4 man rush is not working for the Packers and if Capers decides to only rush 3-4 Orton will have a big day again like he did in KC.
Click to expand...

The Packers pass rush has been mostly fine this season. The number of total sacks don´t tell the whole story. BTW the defense has 17 of their 29 sacks when they´re not blitzing.

captainWIMM said:
The Packers pass rush has been mostly fine this season. The number of total sacks don´t tell the whole story. BTW the defense has 17 of their 29 sacks when they´re not blitzing.
Click to expand...

Agreed. In fact isn't that EXACTLY the point certain forum members have made many times regarding sack numbers and how misleading that can be while other certain members have continually argued the opposite?

Devine's name makes me sick all over again....Willy Wood on Devine: “I didn’t like him. I didn’t think he knew football. I was surprised how they could have hired this guy." (from Cliff Christl article 9/9/14)