Hey all, im just curious what anyone thinks we should do about our secondary? im just very confused right now....if we don't blitz we give them time to pick us apart but if we do they throw over the top anyways....i love that we have young DB's but when are they gonna start doing well consistantly? some of the blown coverage today was pretty juvenile.....I think i could have had tighter coverage in some instances...what do u think about the pack's predicament??? Just curious???

no body is gonna give me any help on this huh

You are right that teams can pick apart the secondary, but the reason for that is a weak front four pass rush.

Al Harris has more than held up his end in man coverage. Carrol and even Thomas have not been bad as rookies go. But too often it has been "mission impossible".

Some have suggested drafting Erasmus James. I don't know if he is the answer, but at this point, the team has plenty of depth. I would like to see our first round pick and a couple of others packaged--maybe 1st, 3rd, and 4th, or whatever it would take to move up and get a real stud pass rusher, James or otherwise. That would enable the Packers to drop the linebackers, give safety help, whatever it might take. And when they did blitz, maybe somebody would actually get to the QB.
OP
OP
B

This is very true...i haven't seen the packers pick up a meaningful blitz since last year....Sure KGB is getting his fair share of sacks, but in my eyes they seem to be coming at somewhat meaningless times...i would like to see some changes on that packer front four for next year!
B

We gotta stop blitzing so much. We don't have corners that are good enough to just leave on an island. I think we should draft erasmus james. Then, with our front four actually providing some pressure, maybe slowik will realize that we don't have to blitz every play, and therefore we can drop people into pass coverage and help our corners out.
OP
OP
B

Erasmus may be good enough to make it big in the NFL, but i'm just leary of his size...he is a little undersized and that could really hurt him....I agree that we need to stop blitzing though, we need to use those only rarely and start demanding pressure from our front four....this is killing us this year!!!
F

I personally think Roman needs to find a seat on the bench he has been getting beat alot lately and I think Jue as much as I hate to say it may have better coverage skills.
V

I'm not a Defensive Coordinator by any means, but sometimes I have to wonder if Bob Slowik is.

I like an aggressive defense, but having an aggressive gameplan means that you need talent on the line or at linebacker in order to be disruptive. Think back to the Superbowl team. Reggie, Sean Jones, Santana Dotson and Gilbert Brown were giving QBs and running backs nightmares, and alot of those interceptions we saw happen in the secondary were a result of that. You could argue that there was SOME talent back there (Butler), but their individual success was a direct result of a defensive front that was relentless.

What I see now is a coordinator that wants to be aggressive, but doesn't have the push up front to make it successful, and the secondary that is burdened to make something happen afterwards is too young and inexperienced for clean-up duties.

If we get a GM that has a nose for talent, does Bob Slowik then become a genius? I doubt it. One thing is clear to me though. I don't think Sherman knows what he's doing when it comes to evaluating talent, and I don't think he has the right staff to make the right decisions.

This offseason is going to be a mess.
P

It sure would have been nice to use our third round pick on another D lineman instead of a punter. That has to go down as one of the most ignorant draft picks in the history of the NFL. It's bad enough we used a third round pick on a punter, but to make it even worse he's not even playing. I would rank that the biggest bonehead move of the year. It sounds like a move that Mike Martz would make.
G

It sure would have been nice to use our third round pick on another D lineman instead of a punter. That has to go down as one of the most ignorant draft picks in the history of the NFL
Click to expand...

This sure does bring back memories of the pack taking tony mandrich insted of barry sanders. The only difference being mandrich at least played!!!

More man coverage, make the corners go on talent and speed not how much they can grab and no more zone prevent or whatever.
A

This sure does bring back memories of the pack taking tony mandrich insted of barry sanders. The only difference being mandrich at least played!!!
Click to expand...

to get back to topic..a healthy pass rush can make a below-average secondary look just fine. there is no quick fix available on the roster, thats a given. can we build through the draft? of course, but the fact is brett's clock is ticking. if we could keep relatively the same team, and beef up the d-line through free agency...i think we could make a run, provided we get rid of slowik.
P

I see at another board gilbert brown is begging the packers to come back. It was stated that he is in the best shape of his life and would play for a song. Just the thought of gilbert and grady over the nose aganist a running team puts a smile on my face. With these two being double teamed, this could really open up a pass rush helping our weak defensive backfield!!
A

yeah i saw that on the packernews forum..i wont get my hopes up, but would be fantastic.
F

Gilbert can't be any worse then the useless Cletius Hunt...
T

I don't understand why the Packers CB's play so far off the WR's. They seem to line up at least 10 yards off, and don't play any "bump and run" whatsoever. The middle crossing route is almost always open as a result. We have the speed (Harris, Carroll, Thomas) to disrupt the other teams timing and still stay with the receiver. Sharper is clearly hurt and in decline but should still be able to provide veteran leadership. Roman is very good against the run but defensive on the pass. Ahmand and Joey will become good players. Everyone else in that secondary, Jue, Hawthorne, Horton .... below average. However, "shut down" corners" are rare. We can help the secondary with a better LB corps and more QB pressure from our DL. That's my story and I'm sticking to it.
B

They need to get their butts up on the line and nail they guy and put him on his can in the first five yards. It's hard to run a pattern when you're laying on the ground. :shock:
T

Bettie,
I totally agree. The corners need to hit the receiver early - in the first five yards. The Pack just doesn't play aggressively. They are backpedalling all the time.
Hit the bast___s! 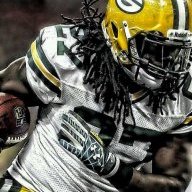 Don't worry Packer fans from 2004. 9 years later we'll still be wondering why our secondary won't hit someone in the mouth! But we'll have won a Super Bowl since then, so it won't matter. With some guy named McCarthy as head coach!! lol if you can believe it

Oh and to the guy named tscbear who said Ahmad will become a "good player" no he won't. He is way to short and loves him some "illegal contact." Oh well.

Interesting....... now we have had some great play at DB in that timespan, from Woodson to Collins to Traymon.

But it's true, we never ever have STRONG guys back there, big hitters... since Chuck Cecil, who would be banned in today's NFL. 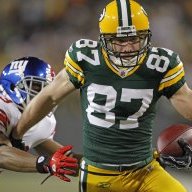 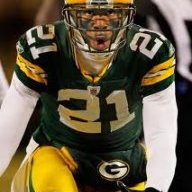 As has been mentioned the pack must improve the d-line. I'd love to see John Jenkins drop to us or trade up. Or as an alternative I'd like Margus Hunt in the second. They must bring in a mean and tough guy in the trenches on D. 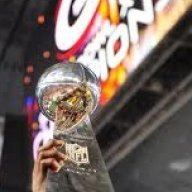 Mike Sherman as a GM sucked....
trading up for a friggin' Punter ?
Meanwhile, Ted found a pretty good ginger punter as an undrafted FA.