So what does everyone think of the Monday Night Football crew this year? I have to say that, although they were completely putrid in the preseason, they have been less bad in the regular season.

Joe Theismann is not nearly as bad now that he is free of Paul Maguire. (And if you've heard Maguire broadcasting college games, you know that he still sucks as much as ever.) I think Theismann has taken on almost an "elder statesman" role now because he knows he's the only guy in the booth who can provide much insight into the game, and he no longer has Maguire carping at him all the time. Theismann has been a pleasant surprise, and this is coming from someone who REALLY hated him before this season.

Tirico is serviceable as a play-by-play guy. Nothing special, but that's okay. He narrates the action and stays out of the way most of the time.

As for Kornheiser, he seems to be trying too hard to make an impression. I think it's because he's a talk radio guy. He makes a lot of extreme statements, and I don't think he really believes them. It's like he's just trying to stir things up. He also tends to state the obvious. Maybe he'll get more comfortable in the booth as the season goes on, but I doubt it. They need to bring in someone solid next year, like Dan Fouts.

What I really hate about the broadcasts, though, is the overproduction. They can hardly ever show two plays in a row without some sort of stupid feature that's supposed to show us how hard they are working to provide us with top-quality entertainment. Hey guys, I've got some advice for you: Just relax, point your cameras at the damn game, and let us watch it!

We can do without all the stupid interviews too. I don't need to know what Hank Williams, Jr., thinks about ANYTHING, and for that matter, I don't much care what Emmitt Smith thinks either. Save that crap for halftime. My thumb gets tired from hitting the mute button all the time. I can't concentrate on a ballgame when the audio is completely unrelated to the action on the field.
D

Great post Greg. I agree with every point you made. Even the Theisman one. Someone must have pulled him aside and said "do about half the talking you used to". Those self promoting interviews drive me crazy.
Y

I still think Theismann is garbage, and you're right about Kornheiser. He's a completely different person on MNF than on PTI.
S

I agree about Kornheiser, seems like he's trying to hard. From what I've heard, though, he's most likely done after this season, on his own terms. Theismann is... eh.. kinda dumb sounding at times. I like the job Jaws did when he did the game for the MNF double header, seemed very knowledgable and maybe he'll get some consideration for next year.

One thing that bothers me - the opening credits. What the hell? Those aren't even real teams.
C

I think for pure football fans it's hard living up to Michels and Madden. The thing I like about Madden is it's all about football while now on Monday they seem to concerned which celebrity they can get in the booth. I bet Madden doesn't even know who Tom Cruise is. LOL
D

And if I have to hear about his friggin' fantasy football team again, I'm gonna puke.

I tune the MNF announcers out if possible. More often than not I find them mildy irritating but generally benign. I can't stand the "guest in the booth" every week and now there are TWO sideline reporters spouting drivel.

What really bugs me the most though about the new MNF is the score etc smack in the middle of the screen.
Y

I agree with you Greg except for Theeezman, I think he is getting worse, he talks too much and if I never see him in that stupid cowboy hat again it will be too soon.
B

I think Kornheiser is getting better as it is going along. He had a great thing to say about the ovation that Romo received from the crowd:

"Sure they'll cheer him now, but he's only everyone's favorite until he throws an interception."

And then you know the rest...
P

Wilbon from PTI would make a good announcer....exept the fact that hes a bears fan 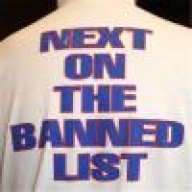 As long as they keep the cameras on the game, they can put whatever has been in the booth they like. It seems that ABC cut Madden's hands off, I didn't notice him drawing all over the screen the last time I watched MNF. The guy is a mumbling clown, I would like to cram that multi-legged turkey he had every year at FOX down his I am afraid to fly throat.