The play of the 37-year-old quarterback, listed as questionable with groin and a nerve injury in his right elbow, comforted the coaching staff.


"That guy's a gamer," offensive coordinator Jeff Jagodzinski said. "I've seen that guy with a torn knee and all that and still make the plays. I never doubt he'll be there."

Favre had an extra day of rest on Thursday because the Packers play at Seattle on Monday night. Favre, who has started 251 consecutive games, was tackled hard by linebacker Tedy Bruschi late in the second quarter of the Packers' 35-0 loss to the Patriots last Sunday and did not return to the game.

The 16-year veteran admitted Wednesday he was still struggling with feeling his grip on the ball. Favre said two fingers were stuck shut after the injury, and he couldn't quite feel the ball the way he wants to, so he was struggling to make it do what he wanted it to do in the air.

But he seemed better Friday.

"He said he was feeling pretty good," Jagodzinski said. "I don't think it'll be any factor with that at all. He ended up taking a pretty good shot (on Sunday), but he's a tough guy."

Quarterbacks coach Tom Clements said Favre's mechanics didn't appear to change due to the injury, and Jagodzinski said Favre took all of the first-team snaps in practice, which he said was one of the best of the season for the Packers.

Backup Aaron Rodgers is out for the season. He broke his left foot at some point in the third quarter against New England replacing Favre and played with the injury the rest of the game.

The Packers signed Todd Bouman on Tuesday and only have rookie Ingle Martin as Favre's backups in Seattle.

Jagodzinski said he doesn't know who will be the No. 2 quarterback yet.

Martin has had more time with the team, but Bouman knows coach Mike McCarthy's system from their time together in New Orleans, where McCarthy was the offensive coordinator from 2000-04.

"That has really helped him, as far as picking up the terminology," Jagodzinski said. "He understands what we're doing."

Starting running back Ahman Green said Favre looked like his usual self.

"He looked fine," Green said. "Myself and the guys up front have got to do our job to protect him and give him time in the pocket. That's it."

Favre is no stranger to injuries. The three-time MVP had a large bruise on his hamstring in 2004, a broken thumb in 2003 and an injured knee ligament in 2002 among a bevy of concussions, sprains and scrapes.

Favre has started 231 straight regular-season games -- an NFL record for quarterbacks -- and 20 straight playoff games. Favre said the streak ranks first on his list of achievements regardless of whether he ends up passing Dan Marino (420) for the most touchdown passes in NFL history. Favre has 409 TD tosses.

And the coaching staff believes he'll have a chance to add to that total Monday.

Nothing can stop Favre!!!
U

im glad to hear he is getting better.

Now I can see why they gotta wait to make the next terminator, they're waiting for him to get off the football field.
4

Let's also hope he puts in a vintage MNF performance. He's due for one after the Baltimore disaster.
C

Maybe it's our fault. Last time with the groin injury we told him to stay away from the wifey. Maybe this time we try the opposite and endorse a good pregame rub down! 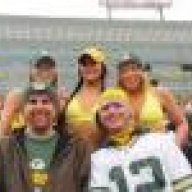 Let's also hope he puts in a vintage MNF performance. He's due for one after the Baltimore disaster.
Click to expand...

Yeah he's definately due. A 3 td day would be nice.
D

Maybe it's our fault. Last time with the groin injury we told him to stay away from the wifey. Maybe this time we try the opposite and endorse a good pregame rub down!
Click to expand...

Good point. Might also bring all the feeling back!